For those unfamiliar, a quick "crash-course" will suffice to see the application to the current marriage debate. Quickly, 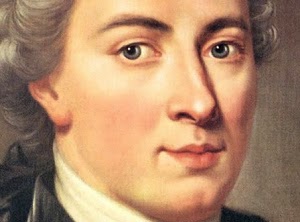 Synthetic versus Analytic Judgements:
Kant claimed all "judgements" (i.e. declarative statements that an be either true or false) are either what he called analytic or synthetic.

An analytic judgement is one where the predicate adds no new information to the subject. An example would be "all men are humans." If you know what a man is, then you, by definition, already know that you are talking about a human, for "man" merely means "an adult human male." Thus, all analytic judgements are really nothing more than tautologies, restating the same thing in two different ways.

Synthetic judgements are the opposite, i.e. the predicate adds knowledge that isn't already present in the subject. An example would be "the sky is blue." There is nothing inherent about the "sky" that necessitates it "being blue," so we're not dealing with "unpacking" the subject, as in analytic judgements, but in having new, independent information contained in the predicate.

Analytic judgements merely "analyze" what is already present in the subject, synthetic judgments "synthesize" the new information contained in the predicate to the subject.

A Priori versus A Posteriori Judgements:
In addition to these two categories, Kant also made another important distinction between judgements, whether they are a posteriori or a priori.

A priori judgements, on the other hand, are not dependent on sensation (i.e we can know them "prior to" sensation). All men being humans, for example, isn't dependent on seeing all men, it rather is a matter of knowing the definition of "man." This, then, is an example of an a priori judgement, as we need not have direct empirical knowledge to make our judgement, but merely need an understanding of the concepts we are discussing and the ability to reason.

What Does This Have to Do With Same Sex Marriage?
With these distinctions, especially the first distinction (between analytic and synthetic judgments) in place we can see what the debate over same sex "marriage" really is about - whether the statement, "marriage is heterosexual" is an analytic or a synthetic judgement.

Proponents of what has been termed "marriage equality" hold that this statement is synthetic, that the predicate "heterosexual" adds knowledge to the subject "marriage."

Supporters of so-called "traditional marriage" claim the exact opposite, that the statement "marriage is heterosexual" is an analytic judgement, that the predicate "heterosexual" merely restates what is already inherent in the subject "marriage" and thus cannot be changed, even by government fiat.


Why is this Important?
Whichever side you come down on, whether you think "marriage is heterosexual" is an analytic or synthetic judgement, one thing is clear: those who oppose the drive for same sex marriage are not necessarily motivated by hatred or bigotry (although it could be in specific instances). The same is true for supporters of changing the definition. Those on this side are not driven by a desire to destroy marriage, to undermine the foundations of civilization, or to persecute those who disagree with them (although some fringe elements could be motivated by these reasons).

Clearing away the irrational arguments from both sides, allows real conversation to turn on the rational arguments each side puts forth. Kant's distinction between analytic and synthetic judgments helps us do just that.

By appealing not to emotions, religion, or even morality and natural law, we are able to highlight the reasonable position that marriage simply is relationship between a man and a woman, just as a triangle simply is a three-sided plane figure for both statements are synthetic judgements (and, in fact, a priori). Just as sorting out quadrilaterals from the category "triangles" is not unjust discrimination, but merely recognizing reality, so too limiting "marriage" to heterosexual couples can be not driven by a desire for unjust discrimination, but a disagreement over the nature of the meaning of the word "marriage."

The same is true for supporters of the change. They hold a rational, intellectual disagreement over what is meant by marriage. Instead of marriage simply being a relationship between a man and a woman, based in the ability of men and women to come together to create life, marriage is seen as a romantic relationship that ought to carry with it certain public benefits.

Here "marriage is heterosexual" is not like saying "triangles are three-sided" but is akin to saying "the sun circles the earth." Nothing about "the sun" entails it's circling about the Earth. Empirical evidence confirms that it indeed does. Of course, analytic judgements, grounded on inferring facts from witnessed reality, can be wrong and then need to be changed. For the advocate of including same sex relationships into the definition of marriage, the requirement for marriage to be heterosexual is the same as the scientific "fact" that the universe is centered on the Earth.

That Doesn't Settle the Question, Does it?
No, and it isn't meant to. Utilizing the rational distinction between analytic and synthetic judgements doesn't in-and-of-itself settle the issue. It doesn't end the debate. It does, however, allow the debate to commence on entirely rational grounds. It allows real discourse to replace the sloganeering, shaming, and other attempts to cloud the issue with sentimentality and irrationality from both sides.

Once the air is cleared, once reason takes center stage, the rational case against and for same sex unions being marriages can be made and that is a good thing for any thinking person, no matter which side of the debate you land on.

It also makes sense of the possibility for someone to "evolve" on the issue. If a person was motivated to oppose recognizing same sex unions as marriages because of hatred, they couldn't be convinced to change there mind - for it isn't a matter of intellect that has determined their position. Likewise, if a person committed to change was motivated by a hatred of the institution of marriage and thus wished to destroy it, no argument could convince them to abandon their position. However, as the argument - at its best - is centered on reason people on either side can change their minds. President Obama can support same sex marriages now, even though he opposed them as a candidate, not because of political opportunism, but because he has changed his opinion on the issue. The same can be said of someone who makes the opposite switch.

The angry discourse that passes as argument on talk news shows and media reports prevents rational conversation. This post, hopefully, helps to undermine that, even if only in a small degree for the few readers of this blog.

Let us lay aside animus.