Epiphany: "Chalking the Door" and Other Traditions

Today, here in the United States, we anticipated the celebration of the Feast of Epiphany (which falls on January 6, but, again here in the US, was celebrated yesterday, the fourth). I made casual mention of one of my families Epiphany traditions on Google + and received the following comments, 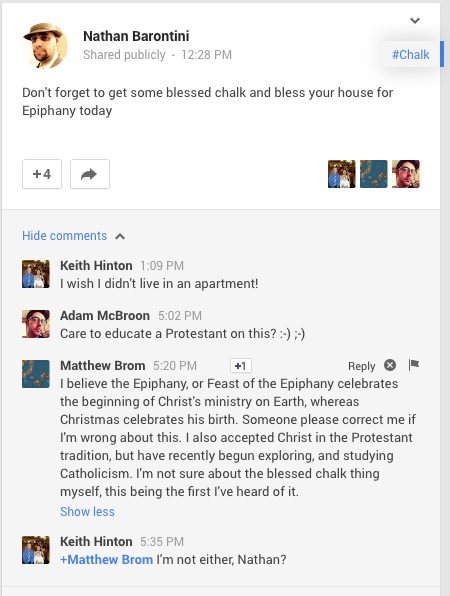 which I thought I'd answer here for any other curious readers.

What is Epiphany?
Epiphany isn't exactly the celebration of the beginning of Christ's ministry, but several feasts we celebrate this time of the year, taken together, do mark the various theophanies of Christ, including the launch of His public ministry. 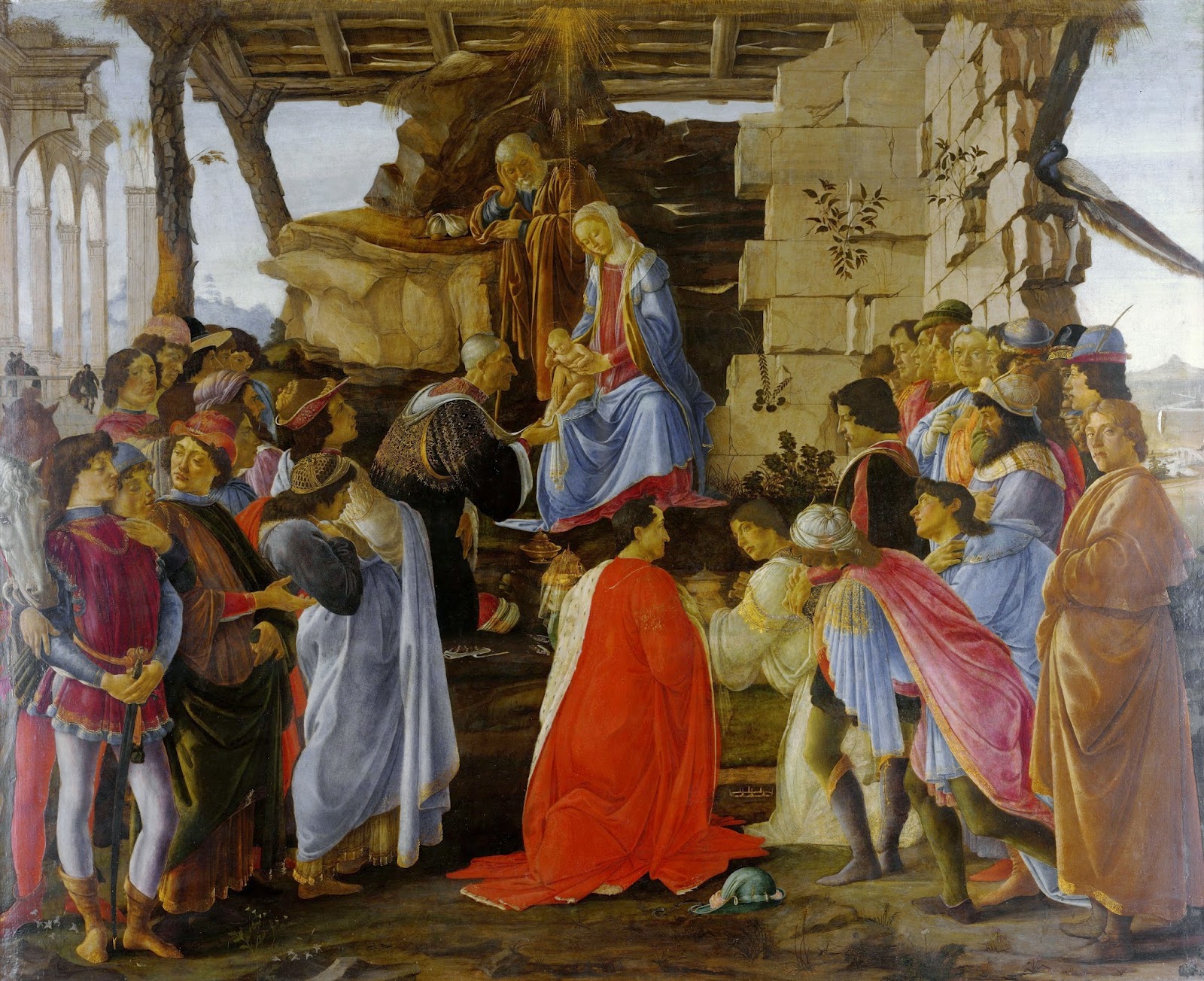 Why is Epiphany a Theophany* to the Gentiles?
Which brings us back to the original question, what is epiphany. Epiphany is the celebration of the visit of the Three Wise Men from the Orient to the Infant Jesus. This great feast traditionally ends the "Twelve Days of Christmas" (yes, they are the twelve days after Christmas, not before). Thus, traditionally, the Sunday after Epiphany is the day to take down all those Christmas decorations and toss the tree (you haven't done that yet, right?). If that seems late, some places traditionally celebrated Christmas up to the Feast of the Purification of Mary (aka "Candlemas") in early February!

What's Up With the Chalk?
Because Epiphany is so close to the New Year, it is a long established custom to bless the front door of your home on Epiphany, asking for God to shower His Grace on all who enter through the door over the coming year. The blessing is represented by writing, typically with chalk (a reminder of the clay from which God made man - cf. Gen 2:7) that has been blessed at Epiphany Mass, the numbers of the year with the initial letters of each of the wise men's names, separated by crosses. So this year we wrote,

The Bible Doesn't Give the Names of the Wise Men...
Yes, but the Bible isn't the only source of Revelation, Jesus is (Joe Heschmeyer at Shameless Popery just posted a great article on this). Tradition, and early tradition at that, has it that the three wise men, who certainly must have had names, were Caspar, Melchior, and Balthazar. The three letters also stand for the Latin phrase "may Christ bless this house" (Christus mansionem benedicat).

What Prayer is Said During the House Blessing?
There are various prayers out there, but the one we use is,

Leader: Peace be to this house and to all who dwell here in the name of the Lord.
All: Blessed be God forever.
Leader: Read John 1:1-14 (I recommend going with the Douay-Rheims for an occasion like this)
Leader: Inscribe the blessing on the door or on the lintel.
All: Lord God of Heaven and earth, you revealed your only begotten Son to every nation by the guidance of a star. Bless this house and all who inhabit it. May we be blessed with health, goodness of heart, gentleness and the keeping of your law. Fill us with the light of Chirst, that our love for each other mat go out to all. Father, bless all who gather here. Send your holy angel to defend us and fill with grace all who enter this door. We ask this though Christ our Lord. Amen.

Do you do anything else to celebrate Epiphany?
We do! This is pretty much the end of out Christmas celebration (even though the decorations hang around for another week), so we try to make the most of it. First, upon waking, the children find small gifts and candy laying in wait for them (Epiphany being the day "La Befana" brings gifts to Italian children). We read the story of Befana (an old woman who declines to follow the wise men to visit the baby King, but has a change of heart. Sadly, it's too late. She now scours the Italian countryside - and some Italian American homes - in search of the Baby Jesus. As she doesn't know which baby He might be, she leaves gifts for all the kids she visits). Then, its off to Mass and back home for the house blessing. Afterwards we move the wise men to join the rest of the figures in the Nativity scene and spend the day visiting family. 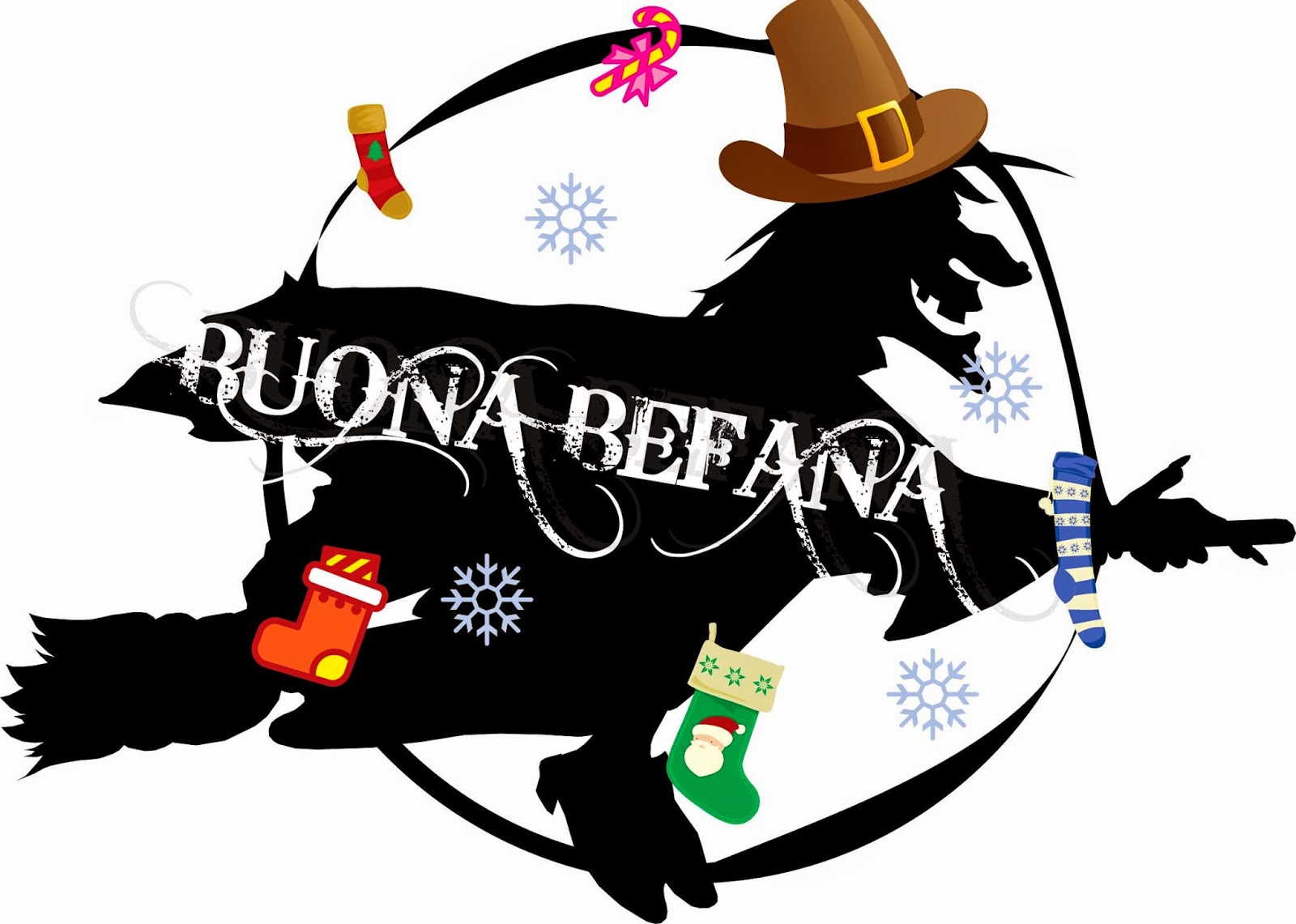 *What is a Theophany?
A visible revelation of God to man; the burning bush would be an example from the Old Testament. The supreme theophany, of course, is the man Christ Jesus.