Today, we are continuing to look at Pope Pius IX's Apostolic Constitution Ineffabilis Deus, part one can be read HERE.

The Annunciation
When the Fathers and writers of the Church meditated on the fact that the most Blessed Virgin was, in the name and by order of God himself, proclaimed full of grace by the Angel Gabriel when he announced her most sublime dignity of Mother of God, they thought that this singular and solemn salutation, never heard before, showed that the Mother of God is the seat of all divine graces and is adorned with all gifts of the Holy Spirit. To them Mary is an almost infinite treasury, an inexhaustible abyss of these gifts, to such an extent that she was never subject to the curse and was, together with her Son, the only partaker of perpetual benediction. Hence she was worthy to hear Elizabeth, inspired by the Holy Spirit, exclaim: "Blessed are you among women, and blessed is the fruit of your womb."

Mary Compared with Eve
Hence, it is the clear and unanimous opinion of the Fathers that the most glorious Virgin, for whom "he who is mighty has done great things," was resplendent with such an abundance of heavenly gifts, with such a fullness of grace and with such innocence, that she is an unspeakable miracle of God -- indeed, the crown of all miracles and truly the Mother of God; that she approaches as near to God himself as is possible for a created being; and that she is above all men and angels in glory. Hence, to demonstrate the original innocence and sanctity of the Mother of God, not only did they frequently compare her to Eve while yet a virgin, while yet innocence, while yet incorrupt, while not yet deceived by the deadly snares of the most treacherous serpent; but they have also exalted her above Eve ...

...
Explicit Affirmation . . .
As if these splendid eulogies and tributes were not sufficient, the Fathers proclaimed with particular and definite statements that when one treats of sin, the holy Virgin Mary is not even to be mentioned; for to her more grace was given than was necessary to conquer sin completely.... And hence they affirmed that the Blessed Virgin was, through grace, entirely free from every stain of sin, and from all corruption of body, soul and mind; that she was always united with God... and that, therefore, she was entirely a fit habitation for Christ, not because of the state of her body, but because of her original grace.

. . . Of a Super Eminent Sanctity
...They testified, too, that the flesh of the Virgin, although derived from Adam (important to note that, although she wasn't stained by original sin, Mary is a daughter of Adam), did not contract the stains of Adam, and that on this account the most Blessed Virgin was the tabernacle created by God himself.... For it was certainly not fitting that this vessel of election should be wounded by the common injuries... In fact, it was quite fitting that, as the Only-Begotten has a Father in heaven, whom the Seraphim extol as thrice holy, so he should have a Mother (remember this is all about Christ) on earth who would never be without the splendor of holiness....


Preparation for the Definition
... from ancient times the bishops of the Church, ecclesiastics, religious orders, and even emperors and kings, have earnestly petitioned this Apostolic See to define a dogma of the Catholic Faith the Immaculate Conception of the most holy Mother of God. These petitions were renewed in these our own times; they were especially brought to the attention of Gregory XVI, our predecessor of happy memory, and to ourselves, not only by bishops, but by the secular clergy and religious orders, by sovereign rulers and by the faithful...

The Mind of the Bishops
Although we knew the mind of the bishops from the petitions which we had received from them, namely, that the Immaculate Conception of the Blessed Virgin be finally defined, nevertheless, on February 2, 1849, we sent an Encyclical Letter from Gaeta to all our venerable brethren, the bishops of the Catholic world, that they should offer prayers to God and then tell us in writing what the piety and devotion of their faithful was in regard to the Immaculate Conception of the Mother of God (Francis isn't the first pope to "poll" the faithful nor the first to be "collegial")...

We were certainly filled with the greatest consolation when the replies of our venerable brethren came to us. For, replying to us with a most enthusiastic joy, exultation and zeal, they not only again confirmed their own singular piety toward the Immaculate Conception of the most Blessed Virgin, and that of the secular and religious clergy and of the faithful, but with one voice they even entreated us to define our supreme judgment and authority the Immaculate Conception of the Virgin...


The Definition
...by the inspiration of the Holy Spirit, for the honor of the Holy and undivided Trinity, for the glory and adornment of the Virgin Mother of God, for the exaltation of the Catholic Faith, and for the furtherance of the Catholic religion, by the authority of Jesus Christ our Lord, of the Blessed Apostles Peter and Paul, and by our own: "We declare, pronounce, and define that the doctrine which holds that the most Blessed Virgin Mary, in the first instance of her conception, by a singular grace and privilege granted by Almighty God, in view of the merits of Jesus Christ, the Savior of the human race, was preserved free from all stain of original sin, is a doctrine revealed by God and therefore to be believed firmly and constantly by all the faithful."

Hence, if anyone shall dare -- which God forbid! -- to think otherwise than as has been defined by us, let him know and understand that he is condemned by his own judgment; that he has suffered shipwreck in the faith; that he has separated from the unity of the Church; and that, furthermore, by his own action he incurs the penalties established by law if he should dare to express in words or writing or by any other outward means the errors he think in his heart.

Hoped-For Results
Our soul overflows with joy and our tongue with exultation. We give, and we shall continue to give, the humblest and deepest thanks to Jesus Christ, our Lord, because through his singular grace he has granted to us, unworthy though we be, to decree and offer this honor and glory and praise to his most holy Mother.... We have, therefore, a very certain hope and complete confidence that the most Blessed Virgin will ensure by her most powerful patronage that all difficulties be removed and all errors dissipated, so that our Holy Mother the Catholic Church may flourish daily more and more throughout all the nations and countries, and may reign "from sea to sea and from the river to the ends of the earth," and may enjoy genuine peace, tranquility and liberty. We are firm in our confidence that she will obtain pardon for the sinner, health for the sick, strength of heart for the weak, consolation for the afflicted, help for those in danger; that she will remove spiritual blindness from all who are in error, so that they may return to the path of truth and justice, and that there may be one flock and one shepherd.

Let all the children of the Catholic Church, who are so very dear to us, hear these words of ours. With a still more ardent zeal for piety, religion and love, let them continue to venerate, invoke and pray to the most Blessed Virgin Mary, Mother of God, conceived without original sin. Let them fly with utter confidence to this most sweet Mother of mercy and grace in all dangers, difficulties, needs, doubts and fears. Under her guidance, under her patronage, under her kindness and protection, nothing is to be feared; nothing is hopeless.... Her pleas can never be unheard.

Given at St. Peter's in Rome, the eighth day of December, 1854, in the eighth year of our pontificate. 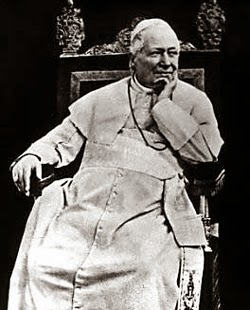