Scientific Secrets of the Shroud of Turin

Recently Pope Francis journeyed to Turin to see the famous Shroud, believed to be the burial cloth of Jesus Christ. The Shroud, when displayed, draws over thirty-thousand pilgrims. It is one of the most popular physical artifacts in the Christian world outside the Holy Land and Rome.

Not only is the Shroud an object of religious devotion, it is also the most studied scientific object in the world, with over 600,000 hours of peer reviewed scientific evidence gathered on it from Christian, atheist, Jewish, and agnostic scientists.

Everyone is talking about Pope Francis and Shroud. Let’s take a quick review of some of the amazing facts about this extraordinary piece of cloth.
What is the Shroud of Turin?
The Shroud of Turin is a a very fine, very high quality, very expensive linen cloth with an image of a bearded man, almost six feet tall on one side. The man wears his hair in a pigtail, the common hairstyle of a Jewish rabbi in the first century, is aged somewhere in his early thirties, and weights about 175 pounds. He is certainly Jewish, as he is wearing a phylactery, a small leather box containing the Shema prayer, “Hear, Israel, the Lord is our God, the Lord is One” from the sixth chapter of Deuteronomy.

The man suffered scourging, crucifixion, and was crowned with a cap of thorns. It has long been held to be the burial Shroud of Jesus, mentioned in all four gospels, and perhaps was also the table cloth used at the Last Supper (it features drip patterns consistent with first century Jewish dining practices on the other side of the cloth).

Didn’t Carbon Dating Prove the Shroud is a Fake?
The authenticity of the Shroud has been an issue of considerable debate, with many people thinking it was proven to be a medieval forgery in the 1980s by carbon testing. Unfortunately, the carbon dating test was done incorrectly and thus led to highly untrustworthy results. Some of the problems with the test included:

Further, the Shroud had been in several documented fires during the course of its history, including one hot enough to melt the silver urn it was stored in (this fire has left its mark on the Shroud with burn holes which can be seen today).

Scientists, wondering what such intense heat would do to carbon dating results decided to replicate the fire. They took a linen, carbon dated to 2,000 years old, and simulated the great fire. Removing the linen, they retested it and got a carbon date 700 years younger than before the fire.
Meanwhile other scientists were looking into what effect the micro-organisms found living on the Shroud would have on its carbon date. After running several tests, they determined these organisms could give a false date off by at least 300 years from the known age of a similar linen object. Some have offered this as a possible reason why mummies typically carbon date 300 to 600 years older than the linens they are wrapped in. Obviously the linens must be at least as old as the mummies!
On top of all that, the “pray codex,” made in 1191, shows the burn marks in the Shroud from a medieval fire. These marks match up with those found on the Shroud. The “pray codex” is nearly a century older than the earliest carbon date of the Shroud, thus proving the Shroud is older than the carbon dating suggests.
Could the Shroud Have Been the Work of a Skilled Artist?
If the Shroud was created by an artist, we would expect to find the telltale signs of an artist’s handiwork. We don’t. For example,

Follow the Blood.
The Shroud has blood serum stains surrounding each of over 120 scourge marks left on the man from being brutally whipped. These stains cannot be seen with the naked eye and were discovered only when scientists examined the image under ultraviolet light.

The image did not transfer under these stains, meaning the stains were left on the Shroud before the image was. The blood and serum stains from the scourging, the cap of thorns, the nail wounds in the hands and feet, and the puncture wound in the side are also consistent with both the Gospel accounts of what happened to Jesus (the only man in recorded history to have been crucified, flogged, pierced in the side, and crowned with thorns) and with what modern (although not medieval) science knows about how blood would flow from the various wounds, including the different bleed patterns from veins and arteries, something that wasn’t discovered until the eighteenth century (i.e. well after any plausible creation date for the Shroud).

Could the Shroud Have Been Made with a Dead Body?
The image couldn’t have been made by laying a crucified body in the Shroud to pass it off as Jesus’ burial cloth. If it was made merely via contact with a body, the image wouldn’t show the parts of the body that the cloth would not have been in contact with, certain parts of the face around the nose for example. The Shroud image, however, does show the full image of the man.

Further, laying a bleeding corpse on the linen and, by some unexplained process, transferring the image onto the cloth, then removing the dead man, would have resulted in blood smearing all over the Shroud, which we do not see.

The body of the man must have disappeared from the Shroud, leaving behind the scorched image and nothing else.
Accentuate the Negative.
When photographed the image of the Shroud on the photographic plates (the “negatives”) is a positive image. This, of course, wasn’t discovered until the first picture was taken of Shroud by an amateur Italian photographer, Secondo Pia, in 1898. Secondo, and everyone else, was shocked that the Shroud, when viewed by the naked eye, is a negative image.

Later, the same effect was discovered to occur in the aftermath of a nuclear explosion. When the atomic bomb was dropped on Hiroshima, the heat and radiation were so intense that the bodies of people were vaporized, leaving behind only an image where their shadow had fallen on the building or street behind them. These painful images are all photographic negatives.

The Shroud image seems to have been created by a sudden burst of light, heat, and radiation not unlike that created by a nuclear explosion.

The Third Dimension.
The Shroud image has 3-D information stored within the 2-D image. Like the blood serum and the negative qualities of the image, this was unobservable for the vast majority of the history of the Shroud only becoming known after a 2-D photo of the Shroud was placed under a 3-D image analyizer. To the amazement of everyone involved the 2-D image of the Shroud, unlike every other 2-D picture in the world, shows a perfect 3-D image of the man buried in the Shroud under the 3-D analyizer. All other 2-D images, show up distorted.

The 3-D image also has provided researchers with some other important clues about the age of the Shroud:

The Holy Lance.
Analysis of the wound in the side also points to a first century date of execution and burial. The side wound measures 1.5” wide by .75” high, the exact dimensions of a first century Roman lance. The wound also shows no signs of swelling meaning the man was already dead when the lance was driven into his side. This evidence also accords with the eyewitness testimony left in the first century accounts of Christ’s death.

Pollen.
Flower pollen has been found on the Shroud, including eighteen different species that are only found in the area surrounding Jerusalem. Many of these are spring pollens, suggesting the man was wrapped in the Shroud in Jerusalem during the spring when Jesus was crucified. If it was a medieval forgery, it is hard to imagine an artist traveling to the Holy Land to cover the Shroud in Middle Eastern pollen in the hopes of fooling twentieth century scientists!

“You will not Allow Your Faithful One to See Decay” (Ps. 16:10)
The man in the Shroud is dead, but not for more than three or four days before the blast of light, heat, and radiation left the image on the Shroud. Scientists determined this because the man in the image is in a state of rigamortis, but his body hasn’t begun to decompose. 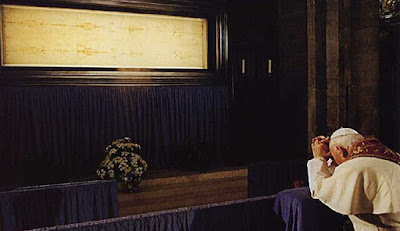 For these reasons and because of the moving accounts of those who have beheld the Shroud in faith, St. Pope John Paul II called the Shroud “the greatest relic in Christendom.”