Some will celebrate the eponymous man and his accomplishments. Some will be happy for a day off of school or work (if they even get one). Others, however, especially those who loath western culture, their own culture and thus, in some way their ancestors and themselves, will stop to denounce Columbus and cry out for this holiday to be stripped from the calendar.

What was once an uncontroversial day to celebrate one of the greatest navigational feats in human history has, unfortunately, become a moment for those living on these shores to battle one another.

Thus we each are forced to ask ourselves who was Columbus? What is his import? Is he a character to be celebrated? A villain to be denounced?

Can we, in 2015, still raise our voices to proclaim the greatness of the "Admiral of the Seas? Or do we now, with many of our contemporaries, merely see Columbus as an imperialist slave-trader?

More specifically, how should we, as American Catholics, feel about Christopher Columbus?


Perhaps the best way to answer these questions is to reflect on how we have answered them in the past. Therefore, today we turn our eyes to selections from the Encyclical of Pope Leo XIII from July 16, 1892 on the occasion of the Quadri-centennial of Columbus' famous voyage. (With my comments and emphases).


"To Our Venerable Brethren, the Archbishops and Bishops of Spain, Italy, and the two Americas.

Now that four centuries have sped since a Ligurian first, under God's guidance, touched shores unknown beyond the Atlantic, the whole world is eager to celebrate the memory of the event, and glorify its author. Nor could a worthier reason be found where through zeal should be kindled. For the exploit is in itself the highest and grandest which any age has ever seen accomplished by man; and he who achieved it, for the greatness of his mind and heart, can be compared to but few in the history of humanity. By his toil another world emerged from the unsearched bosom of the ocean: hundreds of thousands of mortals have, from a state of blindness, been raised to the common level of the human race, reclaimed from savagery to gentleness and humanity (we often forget today, in our age of cultural relativism and hatred of Western Civ. how brutral native society was. "Savagery" - human sacrifice and cannibalism were ritually practiced - and "blindness" - technologically the native populations were in the Stone Age - darkened pre-Columbian America), ; and, greatest of all, by the acquisition of those blessings of which Jesus Christ is the author, they have been recalled from destruction to eternal life (extra ecclesiam nulla salus - even though the natives were in invincible ignorance of the Catholic Faith, unrepentant violation of the moral law leads to damnation and without the teachings and graces available to Catholics the road to destruction is indeed very wide.) Europe, indeed, overpowered at the time by the novelty and strangeness of the discovery, presently came to recognize what was due to Columbus...amidst so lavish a display of honor, so unanimous a tribute of congratulations, it is fitting that the Church should not be altogether silent; since she, by custom and precedent, willingly approves and endeavors to forward whatsoever she see, and wherever she see it, that is honorable and praiseworthy. It is true she reserves her special and greatest honors for virtues that most signally proclaim a high morality, for these are directly associated with the salvation of souls (i.e. Columbus is not a saint. He did evil things and his ultimate fate is unknown to the Church); but she does not, therefore, despise or lightly estimate virtues of other kinds (i.e. although Columbus wasn't a saint, we still can, indeed should, praise his virtuous actions)...

2. But there is, besides, another reason, a unique one, why We consider that this immortal achievement should be recalled by Us with memorial words. For Columbus is ours; since if a little consideration be given to the particular reason of his design in exploring the "mare tenebrosum," and also the manner in which he endeavored to execute the design, it is indubitable that the Catholic faith was the strongest motive for the inception and prosecution of the design; so that for this reason also the whole human race owes not a little to the Church.

3. ...We say not that he was unmoved by perfectly honorable aspirations after knowledge, and deserving well of human society; nor did he despise glory (he did demand the title "Admiral of the Seas"), which is a most engrossing ideal to great souls; nor did he altogether scorn a hope of advantages to himself (he was to profit nicely from any discoveries he made); but to him far before all these human considerations was the consideration of his ancient faith, which questionless dowered him with strength of mind and will, and often strengthened and consoled him in the midst of the greatest difficulties. This view and aim is known to have possessed his mind above all; namely, to open a way for the Gospel over new lands and seas (Do we still feel the spread of the Gospel and the salvation of souls to be the greatest good for man?).

4. ...when he learned from the lessons of astronomy and the record of the ancients, that there were great tracts of land lying towards the West, beyond the limits of the known world, lands hitherto explored by no man, he saw in spirit a mighty multitude, cloaked in miserable darkness, given over to evil rites, and the superstitious worship of vain gods. (The native populations were lost in a sea of polytheism and nature worship. These gods are "vain" because they either don't exist at all or are demons deluding men and leading them astray, leading them into "evil rites" such as human sacrifice.) Miserable it is to live in a barbarous state and with savage manners: but more miserable to lack the knowledge of that which is highest, and to dwell in ignorance of the one true God. Considering these things, therefore, in his mind, he sought first of all to extend the Christian name and the benefits of Christian charity to the West (the moral teachings of Christ), as is abundantly proved by the history of the whole undertaking..(Columbus) hastens to seek missionaries from Pope Alexander VI, through a letter in which this sentence occurs: "I trust that, by God's help, I may spread the Holy Name and Gospel of Jesus Christ as widely as may be." He was carried away, as we think, with joy, when on his first return from the Indies he wrote to Raphael Sanchez: "That to God should be rendered immortal thanks, Who had brought his labors such prosperous issues; that Jesus Christ rejoices and triumphs on earth no less than in Heaven, at the approaching salvation of nations innumerable, who were before hastening to destruction.(These were all people no Catholic knew. Men, like Columbus, risked their lives for the salvation of unknown souls. Before we begin casting stones, perhaps we ought to ask if we have, if we even would, do the same.)"

5. ...Columbus threw open America at the time when a great storm (Protestantism) was about to break over the Church. As far, therefore, as it is lawful for man to divine from events the ways of Divine Providence, he seemed to have truly been born, by a singular provision of God, to remedy those losses which were awaiting the Catholic Church on the side of Europe (Today, almost half of all Catholics are in lands discovered by Columbus). 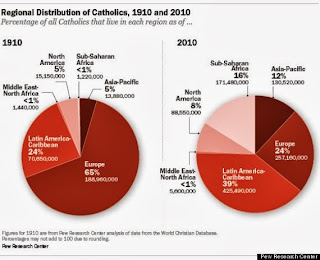 10. Meanwhile, as a pledge of heavenly favors and of Our own paternal goodwill, we lovingly bestow the Apostolic Benediction in Our Lord upon you, Venerable Brethren, and upon your clergy and people."