The Six Days of Creation 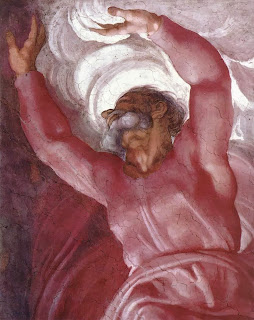 Did anything significant happen this week?
The second week of sixth grade CCD is a momentous occasion. We give each student his own Bible. For many students, this is the first real Bible they have ever owned. Sixth grade is all about scripture, so distributing Bibles in week two sets the stage for everything else we are planning on doing for the rest of the year.

Which translation are you using?
We are going to be using the New American Bible - Revised Edition (NABRE), which isn't my favorite translation, I prefer both the RSV-CE and Douay-Rhiems to the NABRE, but it is the Bible we hear each week at Mass, so it's the "official" Catholic Bible in these United States.

What did you cover in week 2?
Week 2 is all about the six days of Creation. My objective was for each student to be able to list the six days in order by the end of the class. We also spoke about the meaning of the creation account, the difference between what the sacred author is telling us (what God created and why He created it) and what science can tell us (how things were created), and how God created us out of no need of His own, but out of love.

I started class by showing a few pictures from the Sistine ceiling depicting the Creation account. I thought the students might be familiar with at least some of these, but I was mistaken. In fact, the children didn't even recognize the Creation of Man nor could they identify the white-haired bearded man in the image! We spoke a little about these images, then jumped into some vocabulary:

Most of these words were unfamiliar to the kids.

With some basic vocab down, the students read Genesis 1 aloud and I read Genesis 2 to them. We then reflected on what we had just heard. I think it is a fair guess that few (if any) of these kids have spent anytime reading and pondering scripture, so having them do so in class is going to be a main feature of what we do week in and week out. I'm trying to move away from a monologue format of teaching (i.e. me speaking, them listening) into a trialogue format (i.e. me, the students, the Word of God having a discussion), time will tell how that works out.

Next, we had a brief lecture (the "me" part of the trialogue) wherein I tried to give the students a visual map for understanding and remembering the creation account. In Genesis we learn that God had two major problems to overcome in creating the world. First, formlessness - "the earth was without form, or shape" (Gen 1:2). Second, emptiness - "darkness over the abyss" (Gen 1:2). During the first three days of creation, God solves the formless problem, making "spaces" out of the formerly formless world. He makes day and night by separating the light from the darkness (day 1), the sky and sea by separating the waters above from the waters below (day 2), and the land by separating it from the waters (day 3). The next three days see God solving the emptiness problem. He fills the space He made on day 1 by creating the sun, moon, and stars (day 4), fills the space He made on day 2 by creating the fish and birds (day 5), and fills the space He made on day 3 by creating the animals and man (day 6). Finally, God rests creating a day of worship which points us beyond this world (day 7).

Lastly, I had the students draw their own creation accounts, which turned out nicely. Interestingly, not one student included God the Father in any of the pictures, despite His presence in the Michelangelo pictures we started class with. 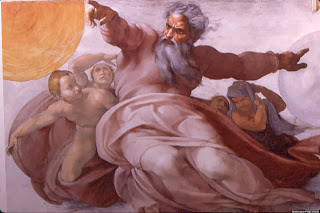 What's on the schedule for next week?
More on the creation of man and the fall.